One or perhaps 2 species distributed throughout the temperate parts of the northern hemisphere; the European and Asia plant is Andromeda polifolia*. North American plants are sometimes treated as a separate species, Andromeda glaucophylla, although the differences between the American plants and those from Eurasian populations are minor ones.

Very like A. polifolia, but with longer leaves which are white and densely hairy underneath. 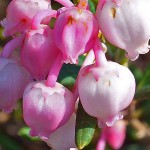