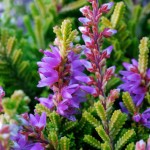 The single species, Calluna vulgaris, is very widely distributed throughout Western Europe including Azores, Iceland and Faeroe Islands, eastwards into Siberia, and southwards into northern Morocco in North Africa; this range represents about 125° longitude west to east and 36° latitude north to south. Calluna is reported reaching about 2,700m altitude in southern Switzerland. Calluna is also a naturalized exotic plant in many other places including North America(See Ref. 1 below), Australia and New Zealand. Ling, Calluna vulgaris, is native in Britain and Ireland. Low-growing, evergreen shrubs requiring acid soil. Calluna has minute leaves closely pressed to the shoots and small, usually lavender flowers in summer and early autumn. Suitable for USDA hardiness zone 5 but some cultivars are suitable for zone 4. This species is very variable, and the numerous selected cultivars (cultivated varieties) reflect, indeed exaggerate, this variation. In habit, ling ranges from prostrate, 5 x 45cm (2 x 18in), to erect and spreading 60 x 75cm (24 x 30in). The foliage varies in colour from dark green to bright green, grey, yellow, orange and red, and there are silver-foliaged plants too. The flowering time varies; in the northern part of the distribution it blooms from June to August, whilst in the southern part of the distribution it blooms from August to November. The white to crimson flowers normally possess a cup-like, four-lobed corolla about, 3mm (¹⁄₈in) long, overlapped by four sepals of similar size and colour. Double-flowered and bud-flowering (called 'bud-bloomers'(See Ref. 2 below)) variants also exist and generally bloom later. Ling is an important garden plant providing colour throughout the year. White-flowered ling – the original white heather – has long been associated with good luck and is a popular wedding flower.(See Ref. 3 below) Heather flower colours are usually defined by 16 colour groups called H1-H16. See the Heather Colour Chart for details of these colours. The H1-16 definitions for colours should not be confused with hardiness zones.

Calluna was used as the name for this heather ‘on account of its very frequent use in the construction of brooms’ – it was derived from the ancient Greek καλλύνω, (kallyno), in turn derived from καλός (kalos, beautiful).